"In this Day whatsoever serveth to reduce blindness and to increase vision is worthy of consideration." Baha'u'llah 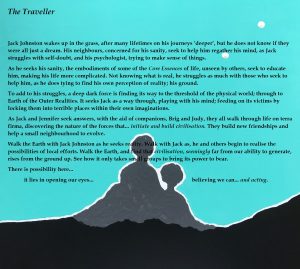 Jack Johnston wakes up in the grass, after many lifetimes on his journeys ‘deeper’, but he does not know if they were all just a dream. His neighbours, concerned for his sanity, seek to help him regather his mind, as Jack struggles with self-doubt, and his psychologist, trying to make sense of things.

As he seeks his sanity, the embodiments of some of the Core Essences of life, unseen by others, seek to educate him, making his life more complicated. Not knowing what is real, he struggles as much with those who seek to help him, as he does tying to find his own perception of reality; his ground.

To add to his struggles, a deep dark force is finding its way to the threshold of the physical world; through to Earth of the Outer Realities. It seeks Jack as a way through, playing with his mind; feeding on its victims by locking them into terrible places within their own imaginations.

As Jack and Jennifer seek answers, with the aid of companions, Brig and Judy, they all walk through life on terra firma, discovering the nature of the forces that… initiate and build civilisation. They build new friendships and help a small neighbourhood to evolve.

Walk the Earth with Jack Johnston as he seeks reality. Walk with Jack as, he and others begin to realise the possibilities of local efforts. Walk the Earth, and find that civilisation, seemingly far from our ability to generate, rises from the ground up. See how it only takes small groups to bring its power to bear.

There is possibility here…

It lies in opening our eyes… believing we can…and acting.